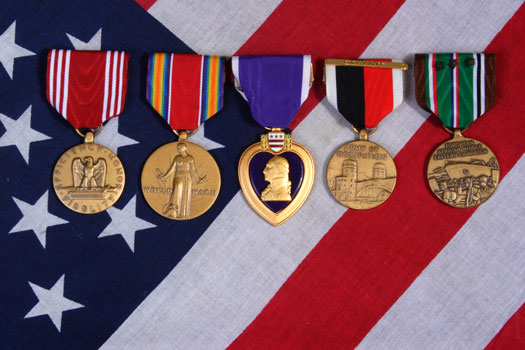 Throughout America’s history, awards with eagle symbols have been handed out to military veterans. This imagery can be found everywhere from old quarters to government buildings, but what does it mean? The history of the eagle’s use in military plaques and awards dates back to the Roman Legion standards. The eagle became the most common military insignia during the second consulship of Gaius Marius, who placed it in prominence over Rome’s other symbolic animals. The legions were sometimes even referred to as “aquilas,” which is Latin for “eagle.” Their eagle insignias were prized possessions they would conceal on their person during battle or when hiding.

The founding fathers adopted the native bald eagle as the national bird because of its independence, power, and strength. There was possibly inspiration from Native Americans, who held it sacred. The bald eagle was first used for The Great Seal of the United States on June 20th, 1782. The Second Continental Congress chose the design created by the Secretary of Congress, Charles Thompson. He based it on previous designs by Thomas Jefferson, Benjamin Franklin, and John Adams. The eagle bares an escutcheon on its breast, symbolizing that the U.S. should rely on its own virtue. The escutcheon is made of the chief and pales, which represent the Congress and the Confederacy of the United States of America respectively. The eagle was placed on the seals and flags of the President, Navy, Marine Corps, and Air Force in 1885.

Among the military awards with eagles, there is the Eagle Award, which is given to a member of the United States Congress or United States Senate for outstanding service to the National Guard. It has an eagle statue on a wooden base with an engraved plate. The U.S. Navy or Marine Corps Naval Aviator with the longest continuous active duty is awarded The Gray Eagle Award. The design was created by Vought Aircraft Companies. It was first given to Admiral Charles R. Brown by Admiral James S. Russell on January 5th, 1961, during the 50th Anniversary of Naval Aviation. After retirement or death of the previous recipient, the award is given to the next service member in line. The second highest military award for members of the United States Army is the Distinguished Service Cross, which is given for gallantry and risking one’s life in combat situations. It has a 2-inch bronze eagle on top of a scroll which reads “For Valor.” The back of the medal has a wreath with a space containing the name of the service member. It was first awarded on January 2nd, 1918 during World War I. Recently, Air Force Lt. Col. Derek Oliver and Vernita Anderson-Manning won Eagle Awards for their excellence.

If you need plaques, trophies, or other custom awards to present to active or ex-military, get in touch with Gold Medallion Awards. We can help you choose the ideal award for your needs. Call 1-858-279-4970 for a free quote.